"Redundant" is the fourth track off Nimrod, and the third single released from the album. It comes after "The Grouch" and before "Scattered" on the album.

Before the Nimrod sessions, Billie's marriage was deteriorating, since he argued with Adrienne constantly. Influenced by this conflict, Armstrong reflected on the relationship from two standpoints: the first being his passion for his wife, the second being the repetitious pattern that the relationship had fallen into. The phrase "I love you" had lost its effectiveness and seemed to be said merely out of routine. 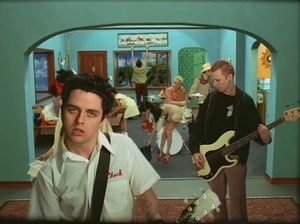 A scene from the music video.

The music video features the three band members performing the song in the middle of a house. The camera angle remains static for the duration of the video.

In the background, several people repeat various mundane tasks for the duration of the video:

The activity peaks near the middle of the video and declines near the end. Tré and Mike leave, but Billie removes his guitar, hands it offscreen, and picks up the newspaper before walking away. The woman comes out to get it and screams upon finding that it is missing.