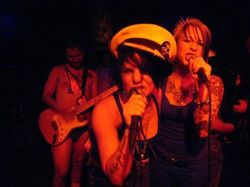 Lady Cobra is a songwriter, rapper, and tattoo artist who served as the lead vocalist of the rap band Mystic Knights of the Cobra.

Cobra co-wrote and lent her vocal talents to the song "Nightlife" from Green Day's 2012 album Dos!, for which she also appeared on the back cover. Afterwards, she went on to become a tattoo artist. She never became well known for her own music.